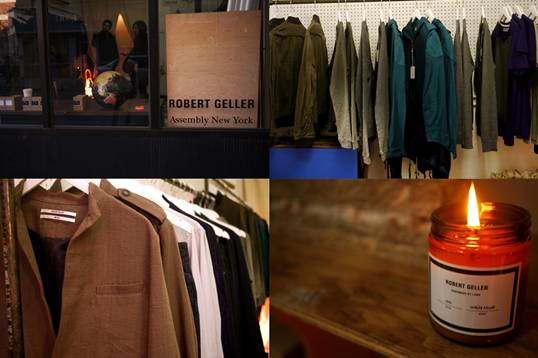 Robert Geller announces the opening of the Key Shop, a collaboration
with Greg Armas of Assembly.  Located at 129 Rivington Street in New
York City, the Key Shop will carry the full Robert Geller line, limited
edition Robert Geller items created specifically for the shop and the
debut collection of Assembly New York.  An additional assortment of
vintage jewelry, artwork and literature will also be offered

The genesis of the Key Shop was a conversation between Robert and Greg
in which Robert expressed a desire to showcase personal favorites from
his collections that weren’t picked up by stores.  They selected the
location based on its accessibility and because of the role Rivington
Street has played in shaping New York City’s musical heritage.

Robert and Greg hope to engage shoppers by hosting a series of
interactive workshops.  Upcoming programs include sessions on crafting
boutonnieres and creating eclectic cocktails with a local mixologist.
Additional programming will be announced soon.

The shop is currently scheduled to operate until April 15th and is open
seven days a week from 12 to 9 pm.