Dare to Be Dapper: 3 Daring Trends for Spring 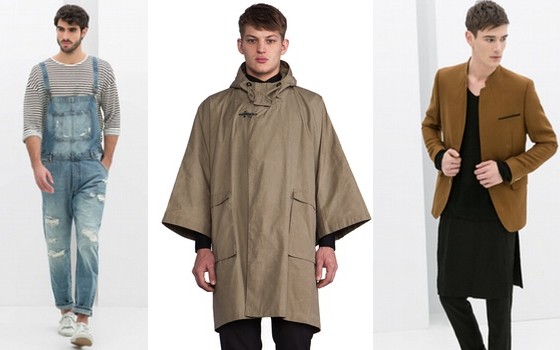 Men in skirts has already has been a touchy subject.  The funny thing is that skirts and longer silhouettes aren’t new and have been around for centuries.   While some brands have taken the trend literal like Raf Simmons, other brands like Hood by Air and Damir Doma used the underlaying trend to give the skirt silhouette.  ZARA is offering the skirt over pants as an feature to those who dare to be dapper.

The Cape is also an old school silhouette that has returned.  We saw this trending in 2012-2013 where men were wearing their jackets draped over the shoulders.   Ferragamo also showed a formal cape for their F/W 2013 collection.   Now that the spring seasons is approaching, we are seeing the cape in rain twill from brands like Neil Barrett and CHAPTEr.

The Overalls are a trend we saw in 1990 that everyone wore.   Whether it was printed, denim, or in a pant or short form, a pair of overalls was a key part of being fresh.   We’ve been seeing overalls trend for the last couple of years.   Whether its on style bloggers attending fashion week, or the runway shows of Mark McNairy,  overalls are trending and definitely for those who dare to be dapper.